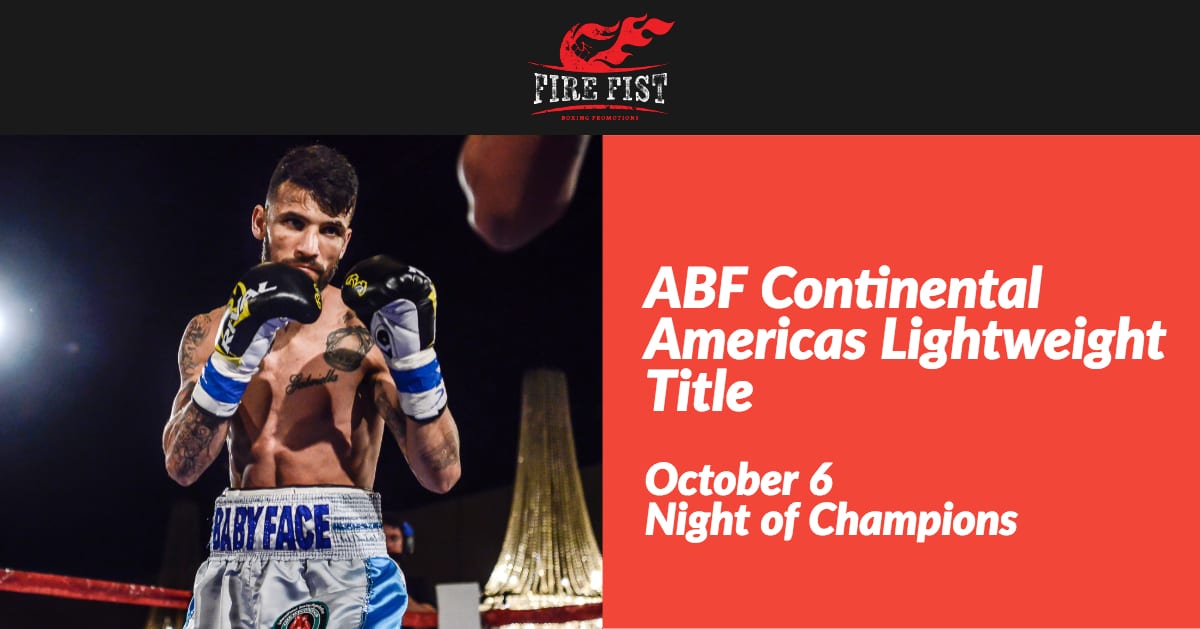 Born and raised in Sao Paulo, Brazil but now fighting out of Plant City, FL, Silva has an outstanding 25-2 professional record with 14 knockouts. On July 14, Silva showed incredible heart and determination but lost via sixth round stoppage against elite rising star Teofimo Lopez. Prior to his gutsy effort vs Lopez, Silva shutout veteran Rogelio Casarez over ten rounds to capture the IBO Continental 135 pound championship.

Living and fighting out of Panama, Forero is a former WBC Latino and Global Boxing Council champion, capturing both belts by stoppage. Forero, 13-7-1 (11 KO’S), is confident Silva will be his next victim and doesn’t plan on leaving it up to the judges.

Silva-Forero is for the vacant ABF Continental Americas lightweight title.

A multi-time champion as an amateur, Reyes has shined thus far in the pros, compiling a perfect 7-0 record with 5 wins by knockout. Reyes appears to be a star in the making however he’ll be facing his toughest foe to date.

Former world champion and St. Petersburg native Noemi “La Rebelde” Bosques returns to her hometown for the first time in more than two years to face ultra-tough Crystal Hoy in a six round super flyweight contest for the ABF Continental Americas title.

Since turning pro in 2012, Bosques traveled the world to face many of the sport’s top fighters. She’s shared the squared circle with Kenia Enriquez, Heather Hardy (twice), Mariana Juarez, Lourdes Juarez, Alesia Graf and Rosalinda Rodriguez. The well-traveled Bosques fought all across the world including bouts in Mexico, New Zealand, China, India and various US cities.

All bouts are scheduled for six rounds except Moran-Rodriguez, which is a four round contest.

“We’re pleased to bring Silva back following his heroic effort against Lopez,” said Jody Caliguire of Fire Fist Boxing Promotions. “He deserves the opportunity to fight in his adopted home state of Florida and the fans enjoyed his fight in March. We’re also excited to present Mark Reyes Jr’s first title and promotional debut for us plus the return of hometown hero Noemi Bosques. From top to bottom, we’ve got exciting fights and fighters from all over Florida so make sure to come out and support what will be an excellent night of boxing.”

All fights and fighters are sanctioned by the Florida State Athletic Commission and subject to change.