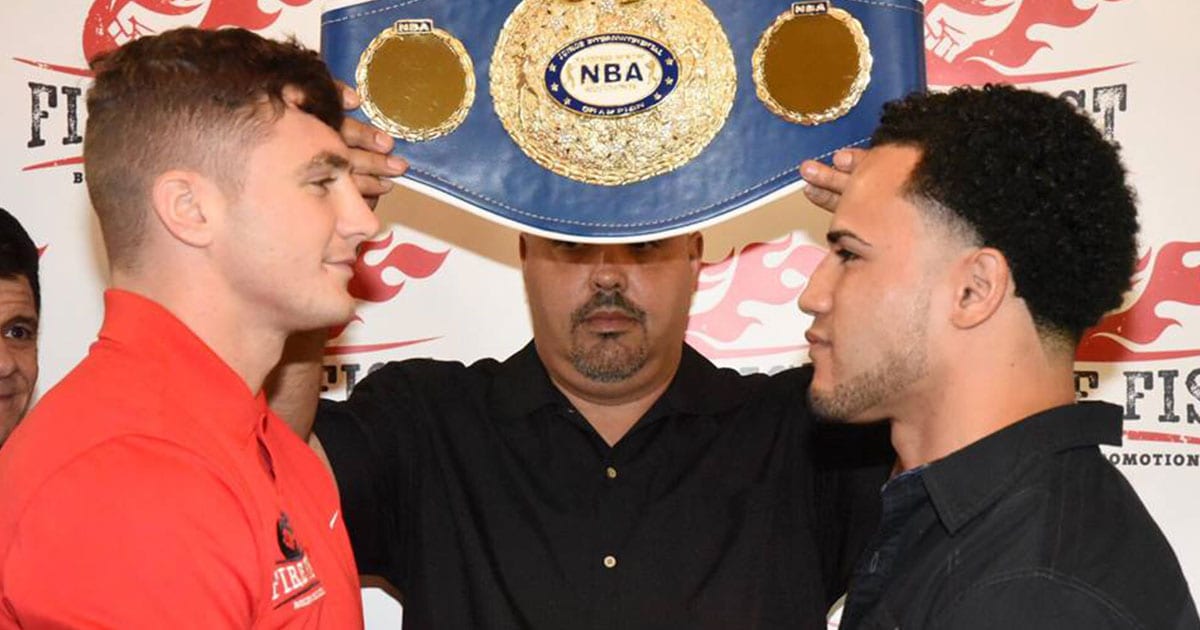 Tampa, FL (June 13, 2018) – When unbeaten middleweight Connor Coyle entered the paid ranks, he was considered one of Ireland’s prized prospects. The Derry native medaled at the 2014 Commonwealth Games and generated a lot of interest from promoters across the globe.
Coyle ultimately signed with Tampa, FL based Fire Fist Promotions and five of his seven professional bouts took place in the Tampa region. To ensure he’s at his absolute best when entering the squared circle, Coyle treks more than 4000 miles from Ireland to Tampa for training camp.

While his stateside training camps play an integral role in Coyle’s improvement, it comes with major sacrifices.

“The hardest part is having to get up and leave my little girl for each camp,” Coyle said of training in Tampa while his 2-year-old daughter remains in Ireland. “I’ve been doing this since she was born and it’s hard because she doesn’t understand why.”

The 7-0 Coyle’s next challenge comes Saturday, June 16 when he meets rival Danny Pastrana of Orlando, FL in a ten round contest for the NBA Intercontinental middleweight title at the Coliseum in St Petersburg, FL.

Pastrana has a modest 6-4 record with 1 KO but has faced good competition. He’s had a full training camp leading up to June 16 and Coyle’s expecting the confident Pastrana to be at his best.

“I’ve put in a full training camp and the work has been done in the gym. Training so far from home is a struggle with my daughter back in Ireland but it also inspires me. I’ll be ready for whatever Danny Pastrana brings Saturday night and plan to return to Ireland with the NBA championship.”

The card is promoted by Fire Fist Promotions in association with Money Round Boxing. A limited number of tickets are available at www1.ticketmaster.com/event/0D00548D9F1C967E. ;

Fans can also enjoy the fight live from anywhere in the world starting at 7 pm ET at Moneyroundboxing.com. The telecast will feature commentary by Boxing Hall of Famer Winky Wright.

In the co-featured bout of the evening, two-time Olympic bronze medalist Ivan Dychko, 5-0 (5 KO’s), of Kissimmee, FL by way of Kazakhstan challenges former title contender Mike Marrone, 21-8 (15 KO’s), of Vero Beach, FL. The 6’9 Dychko is regarded by many as a future heavyweight champion.

Welterweight phenom Mark Reyes Jr. squares off against experienced Puerto Rican Javier Garcia, 8-16-1 (3 KO’s) in a six rounder. Living and fighting out of Tampa, Reyes Jr, 6-0 (4 KO’s), was a top amateur and has a huge following. Against Reyes, Garcia’s facing his 12th unbeaten foe.

Featherweight crowd pleaser Jose “Lil Pacquiao” Resendiz, 5-1 (3 KO’s) of St. Petersburg meets Vincent Jennings of Grand Rapids, MI in a six round affair. Resendiz is a favorite in the Sunshine State, fighting a Pacquiao-esque style that puts fans at the edge of their seats. Jennings, 5-5-1 (4 KO’s), fought all across the country and has a decision win over previously unbeaten Dennis Galarza.

The cruiserweight contest featuring Nicholas Iannuzzi and Vincent Miranda was cancelled due to an injury suffered by Iannuzzi in training.